We have professionally built underwater housings for hire for the following camera systems:

This is an interesting category as it crosses over with both our DSLR and Cinema camera underwater housings. DSLR cameras are being increasingly used in documentary and wildlife film making so they should feature here, and you could say the same for some of our cinema systems too such as the Red Epic Weapon DSMC2 cameras. In both cases you should consider DSLR and cinema housings as broadcast ready too, especially the new Panasonic GH5 and GH5S that both shoot 10bit 4k files to broadcast standards 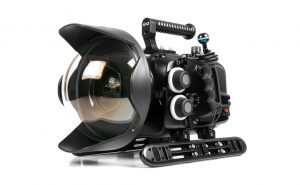 We’ve isolated these cameras below mainly because they have a couple of additional features that endear themselves to this style of TV production such as internal ND filters and audio sync input. The latter in particular is very important when shooting underwater PC’s, see below for a short video on underwater audio recording.

Underwater camera and housing kits that we offer for hire are as follows:

Canon C200 – Canon’s new camera that shoots Cine Raw which will appeal to lower budget feature film makers and when coupled with our shogun external recorder can produce 10bit 4k in prores.

Panasonic EVA1 – This should be the perfect broadcast ready camera and will be the Sony FS72’s main competitor in our opinion. The underwater housing is now available for this camera and features some fabulous optional extras such as Prores Raw capture onto a housed Atmos Inferno monitor and dual native ISO for lower light shooting.

Red Gemini – Probably the most suitable DSMC made by Red that suits documentary work in the field as it shoots dual native ISO as the EVA1 camera does, and also records internal prores for a more broadcast friendly output. Our underwater housing also supports both electronic and manual lenses with full camera control through the housing.

Sony FS72 – Unfortunately no one has made a housing for this camera yet, which we all find a bit odd given it’s popularity as a topside shooter, but we do have access to a colleagues FS7 underwater housing should you wish to shoot on this camera.

To hire any of the above cameras and their underwater housings, please contact us.